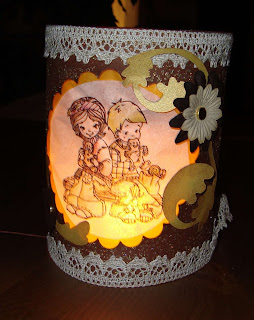 Hello sweet stampin´ friends! I am sending out a light to all of you because it´s St. Martin´s day here in Germany. Martin was a roman soldier and lived in the 4th century and was the first one who became a saint not because of him dying as a martyr but because of all the good things he did in his life. The story all german kids get taught is the story of him being out on his horse in a cold winter night when he met a poor man without any clothes. He stopped, took his coat and cut it apart to share it with this man. When the people heard of this they wanted to thank him but Martin hid in a stall. So the people were walking through the streets with lanterns to find him. So each year on the 11th of november, when the dark has come, the german kids walk through the town together, holding self made "lanterns" and singing songs about St. Martin. Sometimes also a horse with someone dressed as Martin is going on top of the row. That´s only a little part of the legend, but it´s enough to explain my project of the day. I thought I´d create a lantern myself to show you today: 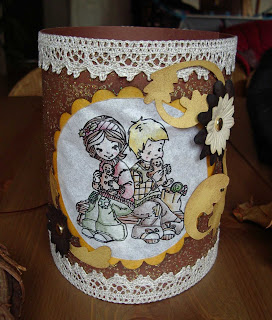 I used "Gingerbread Love" from the Christmas Collection I for my lantern so I will also be able to put on the table during christmas time. Aren´t these two too cute? I love seeing them sitting there, sharing their love for sweets... I carefully stamped the image on tissue paper not using too much pressure because the color may bleed into the paper. I then colored them using some "normal" color pencils.
To make it look nice also during the days I used some brown cardstock and put some shimmer golden embossing powder on it. For the window I put the image behind I used my scalloped oval Nestabilities and added some yellow transparent paper (cut out circle) to frame the image. As decoration I went with some lace, flowers and swirls. 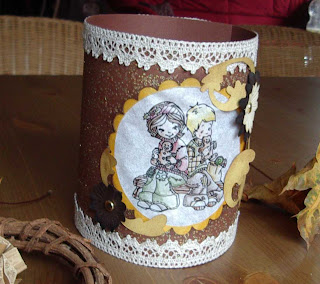 I am wishing all of you a happy St. Martin´s day!
Posted by Kruemel