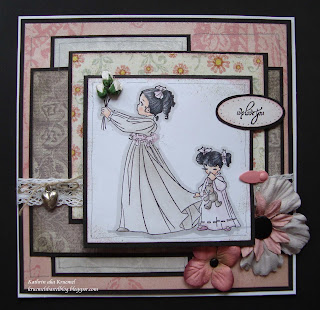 "Star Of Bethlehem" - that´s the beautiful stamp I used for this card. Christmas stamp in april? Star? And what´s me talking about mother´s day?

You´re right - I was looking for a stamp I could use for a mother´s day card and thought "Star Of Bethlehem" would be perfect. I just did some little changes by removing the ink from the star and the border around belle´s hips before stamping. And at the place where the star was I´ve put some rosebuds, the stamps are hand drawn.

So, Belle and her little sister woke up early that morning and are now on their way - still dressed in pyjamas - to wake up their mom with some nice roses and even more big hugs and kisses.

I also hid a little flap on the card - and under it I put "world´s best mom". 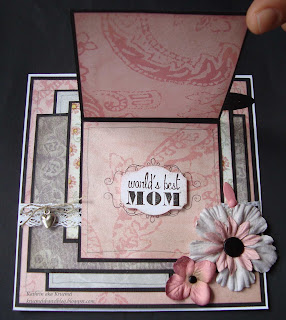 I so remember when I was a kid: me and my younger brother stood up early on mother´s day (which is celebrated the 2nd sunday in may here in Germany). We prepared breakfast, put some little handmade gifts on my mom´s plate and also left the house to go to a big meadow gay with flowers to pick her a nice bunch of wild flowers. And every year it was full of "lady´s smock". Do you know those light pink, tender flowers? They are still my absolute favourite flowers and I am so happy that we have a bunch of them growing in our garden. Well, hubby isn´t since he isn´t allowed to mow the grass until they are gone!LOL
Now I am a mom on my own and can hear my girls working around in the house to surprise me while I have to stay in bed until they are finished...
Posted by Kruemel